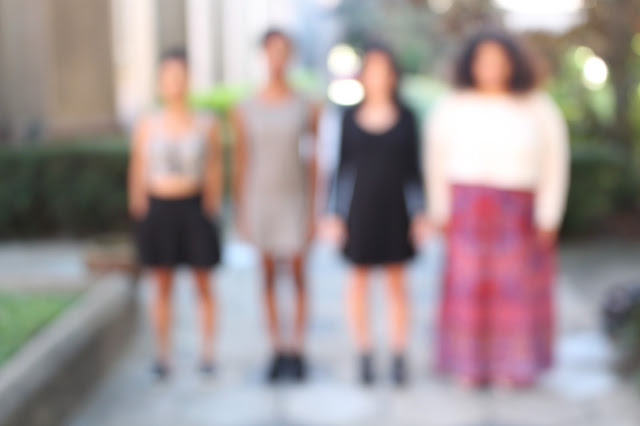 When social media friends become real life friends....ITS LIT!! Lets just say the first time zetabloggerzeta met will never be forgotten. It all started when we finally made it to Orlando Thursday to start our fun filled weekend. As soon as we pulled up it was as if we had known each other for years. The adventures began soon as we got to Ella's place. We put our bags down, changed and hit the road to some of the girls favorite spots around the town. From art museums to chill coffee spots, to chats up until 5am.... Lets say we pretty much never slept that night. Next day we slept through 2 alarms but we were up and excited and en route to Savannah, Georgia. Four hour car rides filled of laughter, Extra friendly truck drivers, screams aka singing and crazy angry road rage drivers. 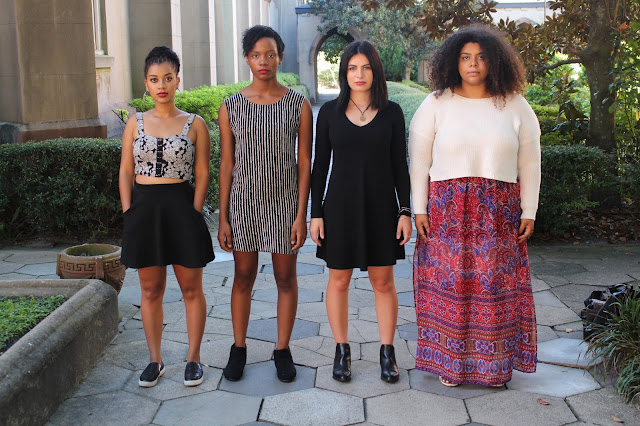 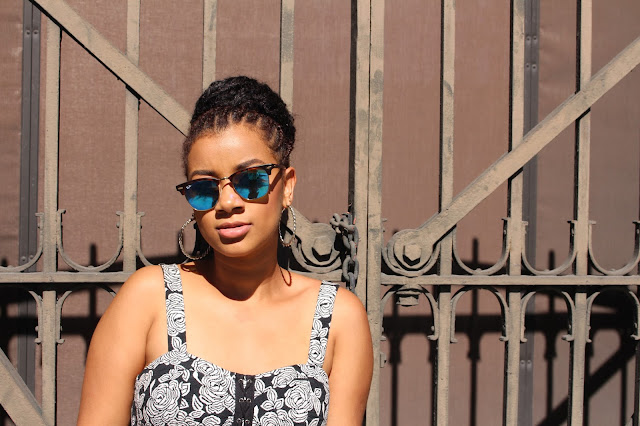 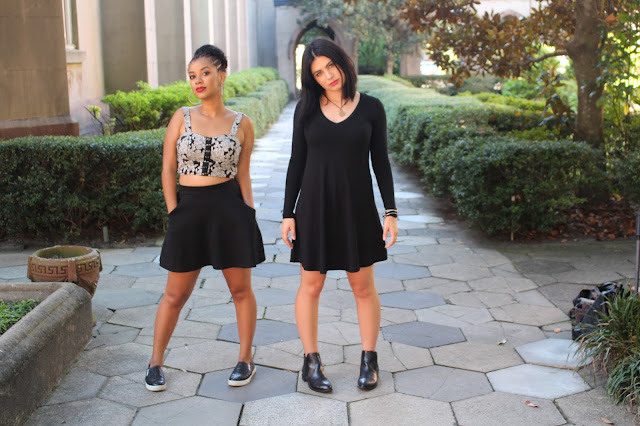 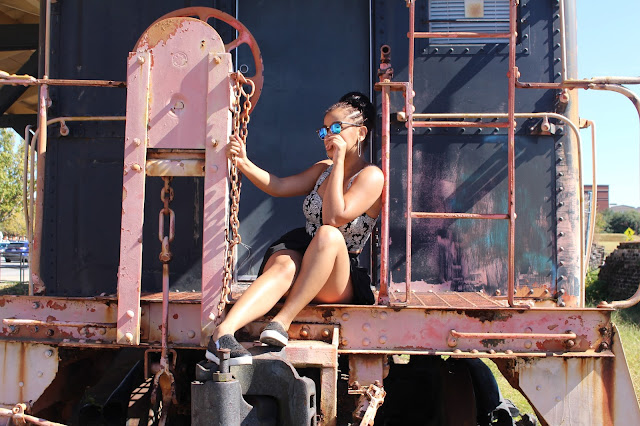 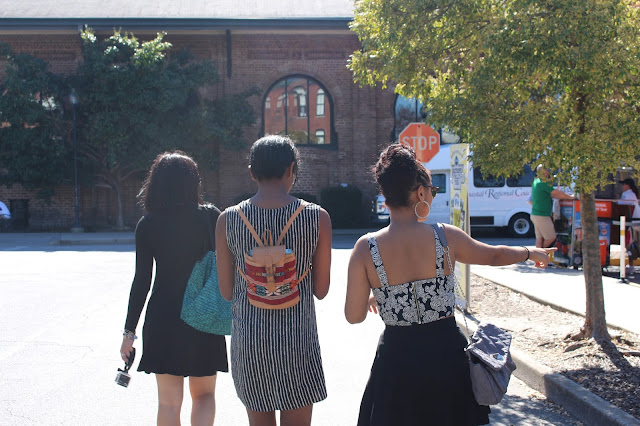 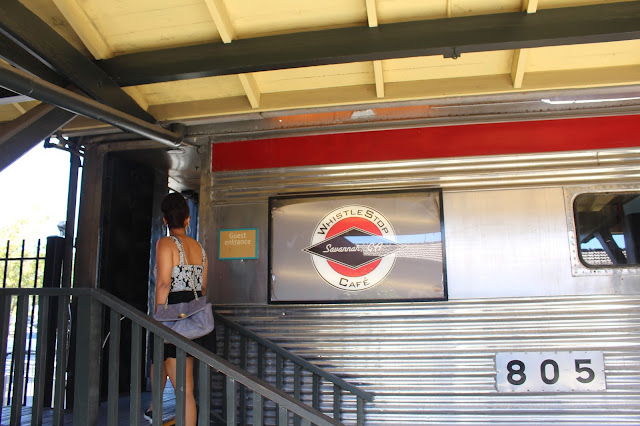 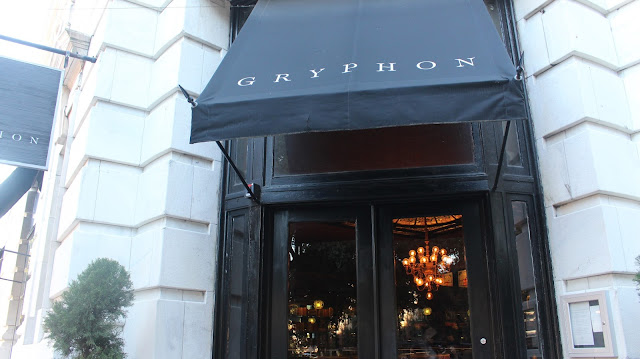 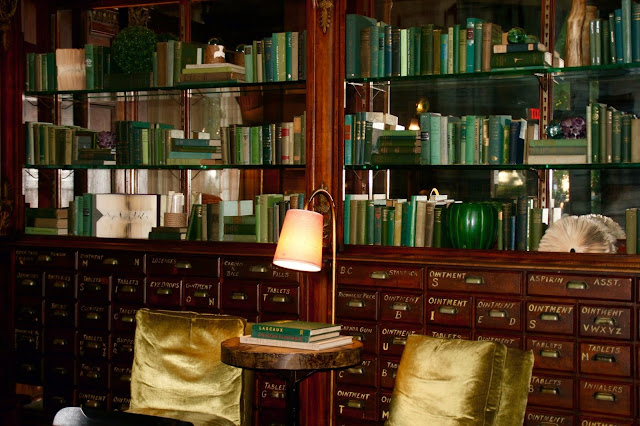 We made to Savannah, Georgia and started exploring right away. First we headed to Savannah's district area where we saw Savannah college of art and design (SCAD). We visited some historic spots as well, and did a whole lot of walking around the town. Afterwards we found a cool spot where we decided to "set up shop" for our zetablogger picture. This became a daily thing for the rest of our trip. After our mini photo shoot we headed over to "The Tea Room" for some lunch only to find out that they were only a tea shop/bookstore and no longer served food. It was a cute little spot for reading and relaxing but we were definitely starving and on the hunt for for. After purchasing Celine's $10.00 aka $30.00 tea, we were told about a spot around the corner that we could get food from. So we headed over to "Gryphon" which was conveniently right across the street. The Place was really cool because it was previously a pharmacy, then bought by SCAD and turned into a bookstore for students, and later on transformed into the restaurant that it now is. And the cool part about it is that they still have the books up all around the restaurant and also our checks came in different books. That was cool because we never experienced something like that before. After the delicious meal we had we were super tired from walking and driving we had done all day, so we headed to the hotel for a quick nap and shower. We slept longer than expected and woke up way past the alarms we set. But regardless, we were up and out again to explore the night life of downtown Savannah.  After much walking around,we stopped in at Lulu's chocolate bar where we tasted the best Ice cream we ever had along with brownies, cookies, and home made white chocolate lattes. We enjoyed our treats as we sat outside of a lounge and jammed out to an awesome DJ who was mixing bomb music that night. After we headed back to the hotel to rest up for day 2. 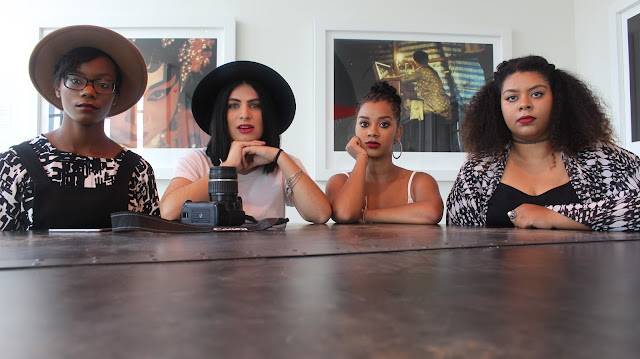 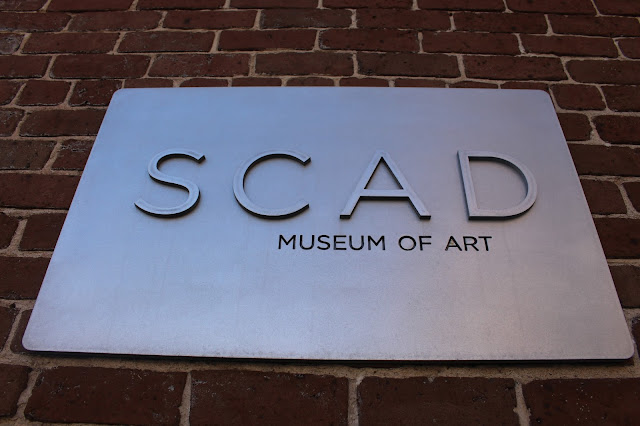 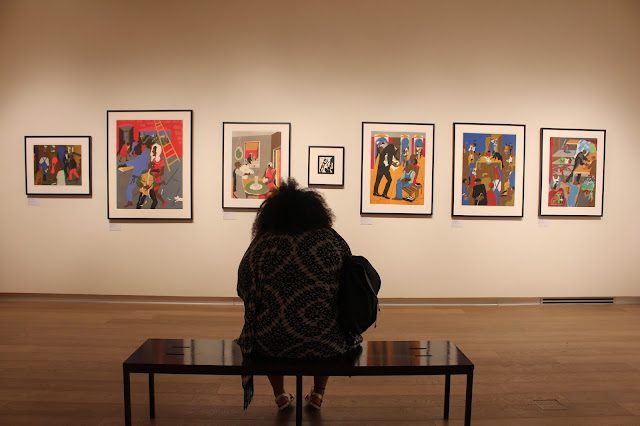 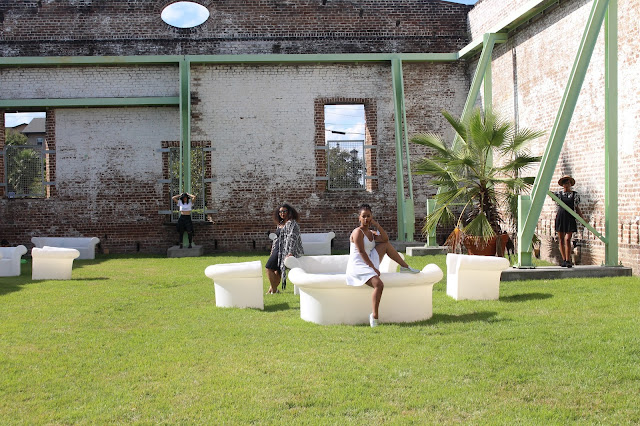 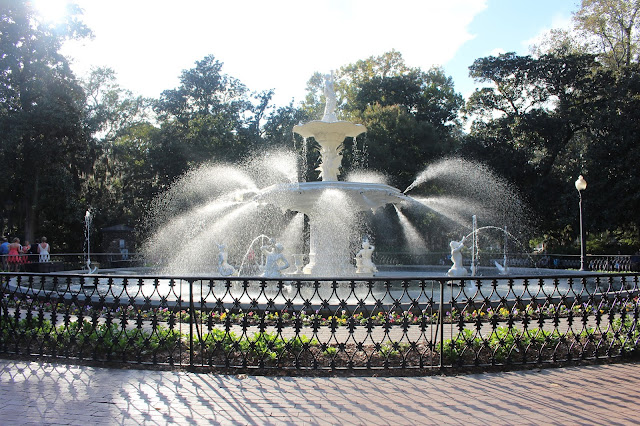 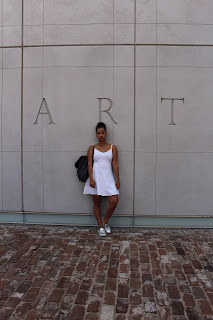 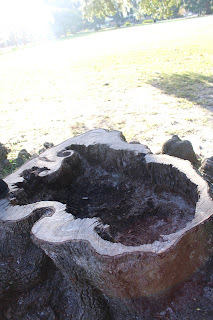 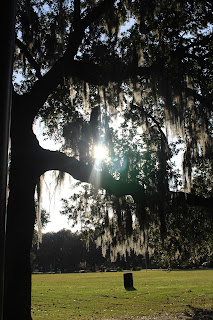 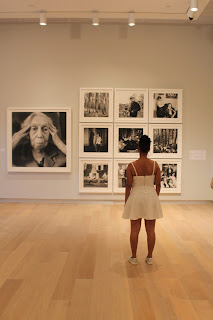 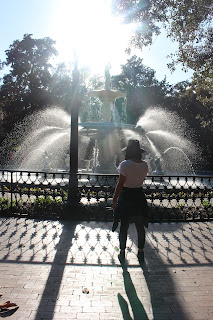 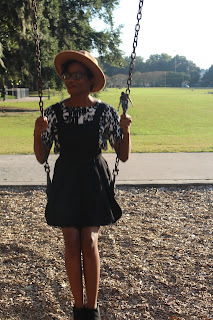 Day 2 we were suppose to be off to an early start however Ella and I were the only ones up early.  Taylor and Celine never woke up when we tired to get them up. We started off the day with brunch at cracker barrel which was nice because I'd never eaten there before. Taylor and I ordered lunch/dinner foods, while Ella and Celine had breakfast. Celine recorded a video at brunch which ended up having a guy creeping on us in the background and turned out to be the joke for the rest of the day. Afterwards we headed over to the museum at SCAD. We saw some really some cool and original art we "set up shop" once again for day our day 2 zetabloggerzeta photo shoot. The photos came out bomb and we looked like we were SCAD students. We stopped off at this cute cafe shop called "The Foundery coffee pub" because we were dying of thirst from the vicious heat that day. We ordered some yummy teas and coffees, sat and had some really nice chats. Ella and I did puzzles and they were really fun. After that we headed over to Forsyth Park which was a park that was much like central park, only on a smaller scale. We saw three different weddings happening, took a stroll through the park, read so many positive quotes and goofed off on the play ground swings a bit. After that we were hungry so we went back to downtown Savannah area to grab some food at a place called "kayak kafe". I ordered the jerk chicken taco and lets just say they were extra spicy that night and I couldn't take the heat! haha so I ordered something else and overall the food was pretty tasty. After that we walked to river street and basically found all the stuff we were looking to go to for the past two days. We walked around and found Fairwalk and saw many cute shops. We planned to see a black and white movie after since the Savannah film festival was happening, but when we went to buy the tickets that night sadly the movie was sold out. So we headed back to the hotel to get some rest as the night was suppose to be coming to an end. That wasn't the case when we ended up starting a crazy funny project, filming, editing, messing with our hotel neighbors, laughing, and going for late night drives when we craved donuts at 2 am. WE DROVE ALL THE WAY TO KRISPY KREME AND THAT "HOTLIGHT" WAS NOT BLINGING!! We were low-key mad so we drove back to the hotel and stopped at Mc donalds for ice-cream.....WHICH WAS ALSO CLOSED but the sign said other wise... as in "OPEN 24 HOURS" so we were leaving the drive through and we saw the manager and  were like the sign said open and she says "I know what the sign says but we closed" in a very rude tone and Ella was hype and the mc donalds trip was the laugh for the rest of the night" (peep the vlog for the mc donalds video"). So we headed back to the hotel and got some rest. 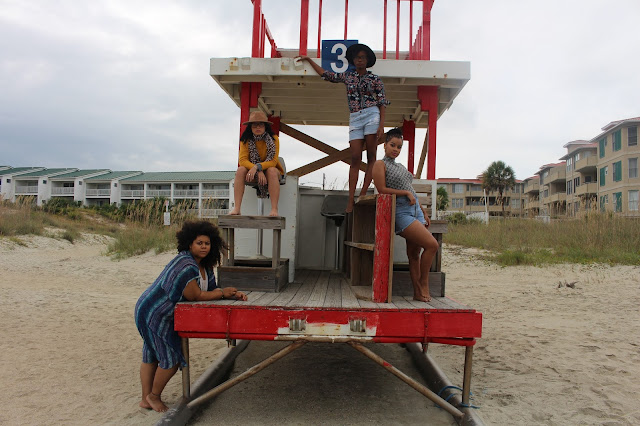 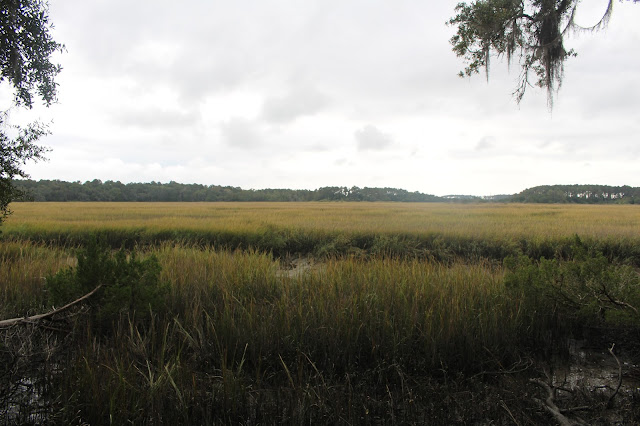 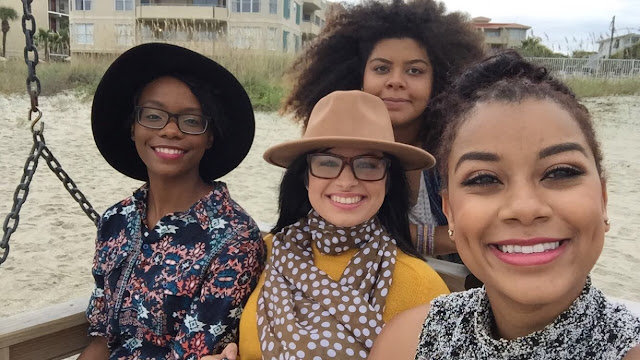 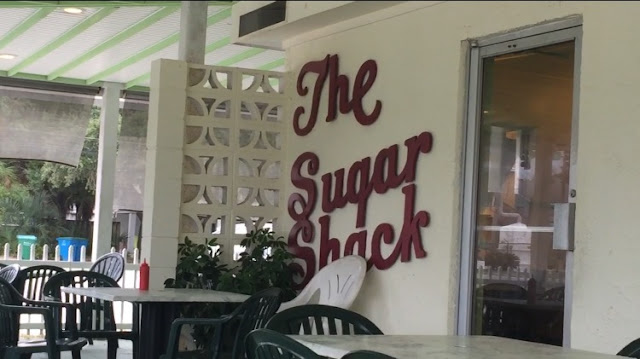 Nobody woke up for breakfast except Ella and I.....And the breakfast wasn't worth a crap. So we went back to sleep both upset and hungry. We all woke up at 9, dressed and packed up our things.We headed out and our first stop was a goodwill. We wanted to find some cute thrifted stuff in the south, but the place smelled bad and we only lasted five minutes in there. Taylor found a cute painting and bought it. Next we head to Wormsloe Plantation and this place was spooky/ creepy but we liked it. We "set up shop" again to get our daily #zetabloggerzeta pics and they were bomb. After that we were super hungry because we had not eaten since 7 the night before. So we went to this close restaurant called "jalapeños" which needed to be called jalopy"no" because it literally took about an hour for our food to come and then it tasted so nasty that we only at a few bites. We left annoyed and still super hungry and heading over to tybee Island. The beach was nice but super cold and the winds were strong. We got one last final Photo shoot in and then headed over to "The sugar shack" for milkshakes. It was getting late and time for us to head back to Florida. We gased up the car and were in route back to Florida with a 4 1/2 hour car ride. 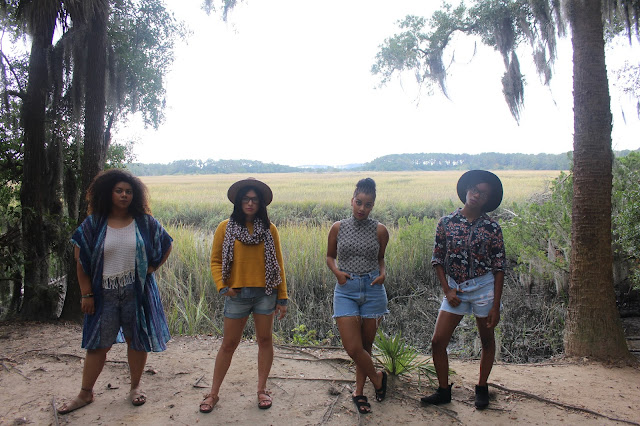 This weekend was packed with, fun adventures, memories to last a life time, and a beginning to a awesome friendship with cool people.

Email ThisBlogThis!Share to TwitterShare to FacebookShare to Pinterest
Labels: Travel